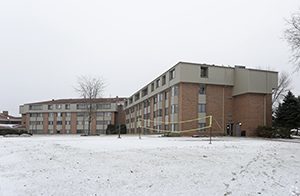 A proposed mixed-use housing development Presbyterian Homes put on the back burner during the recession could soon bring hundreds of apartments, as well has hotel rooms, to Eden Prairie’s commercial center.

Wayzata-based Presbyterian, along with Twin Cities developers Timberland Partners and Oppidan, is proposing to redevelop a 19.75-acre site at 625-635 Prairie Center Drive starting as early as this fall. Presbyterian plans to build 274 units of senior housing, while Timberland Partners would put up 250 market-rate apartments, according to a city staff report. Oppidan is proposing a 110-room hotel or another anchor user on its portion of the project, as well as 20,000 square feet of retail space.

The developers will raze the existing 240-unit Broadmoor Apartments and the 82-bed Castle Ridge Care Center on the property, which is across the street from the Eden Prairie Center regional shopping mall and in the southwest quadrant of Highway 212 and Prairie Center Drive. The project site is less than a quarter-mile south of the site of the future Eden Prairie Town Center station on the Southwest Light Rail Transit line.

The city’s Planning Commission was scheduled to consider recommending approval Monday evening for Presbyterian’s planned unit development district for the site, a preliminary plat and a site plan review. Timberland’s and Oppidan’s portions of the project are being presented as being conceptual in nature, said City Planner Julie Klima.

The city approved a redevelopment plan for the site in 2008 that would have allowed Presbyterian to build 372 units of senior housing, 332 apartments and 36,000 square feet of retail space, the staff report shows. Presbyterian never started that project because it “ran into several development and financing hurdles in 2008 with changing market conditions,” said Presbyterian Vice President Jon Fletcher.

The cost of that project was estimated at as much as $220 million, according to Finance & Commerce archives. Fletcher declined to disclose the cost of the new plan.

In the interim, Presbyterian has kept the existing, 39-year-old apartments and care center operating. Current market conditions make redevelopment of the property possible, Fletcher said in a Tuesday interview.

“As both of those communities have reached the end of their useful life, and with a strong senior housing market overall, the timing was right to take a fresh look at the project and bring a market-driven development solution to the table,” he said in an email to Finance & Commerce.

Presbyterian operates 49 senior communities in Minnesota, Iowa and Wisconsin, according to its website. Residents in the current buildings on the Eden Prairie site are moving out ahead of their closure, Fletcher said.

Presbyterian brought Timberland and Oppidan into the redevelopment for their specialties. Bloomington-based Timberland is currently building its $60.6 million, 222-unit Elevate apartment complex just up the road at 12900 and 12950 Technology Drive. Oppidan has extensive retail development experience, including in Eden Prairie, said Drew Johnson, Oppidan’s vice president of real estate development.

Johnson said Oppidan is seeking feedback from the city on what sort of anchor use it should build on its 7-acre slice of the project. Oppidan is considering the hotel, a grocery store, a “junior big box” retail building or medical office space, he said in an interview. The plan refines Presbyterian’s original idea for the site.

“They astutely recognized perhaps their first approval on the retail side didn’t benefit from a developer with a ton of retail experience,” Johnson said.

The retail space and the anchor Oppidan chooses could open in 2022, Johnson said. The retail space vacancy rate in Eden Prairie was 8.4% at the end of 2018, according to the Minneapolis office of CBRE.

Timberland, too, is still refining the concept for its project, said Ryan Sailer, the company’s vice president of development. If everything goes according to plan, the apartments could open in late 2021.

The apartments would be split between two buildings, according to the city staff report. They will rise on a site Timberland believes will be popular with renters, Sailer said in an interview.

“We believe that the market can support it,” he said. “There are very few infill sites like this left near amenities and services.”

The apartments might include some affordable units, and Timberland might seek financial assistance from the city for the project, Sailer said.

Eden Prairie has a 3% apartment vacancy rate, according to the most recent Apartment Trends report from Marquette Advisors.