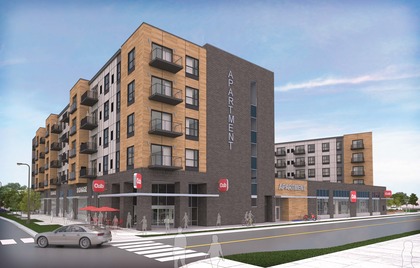 It's the latest on a long list of developments shaped by the light-rail system.
By Jim Buchta Star Tribune

Excelsior-based Oppidan Investment Co. broke ground last month on its apartment and retail project along the light-rail line in Minneapolis that will be anchored by Cub Foods’ first small urban store.

It’s the latest on a long list of developments shaped by the light-rail system. We wrote last week about one of the biggest to emerge yet, a 402-unit apartment project in the Bloomington Central Station development area near the Mall of America.

Oppidan’s project, dubbed the Capp, will include 148 market-rate apartments, the 45,000 square-foot Cub store (about half the size of a normal Cub), 3,000 square feet for other retailers and large public plaza.

The site is across from Minnehaha Regional Park and along existing light-rail and bus rapid-transit lines, and it would be integrated into the proposed Min Hi Line, a multi-mile pedestrian path and “linear park” that would connect Minnehaha Parkway to the Midtown Greenway.

Organizers said the Hi Line wouldn’t just be for bike commuters, but it would be a place where residents are encouraged to walk, bike and play and hopefully drive additional economic growth.

Efforts are also underway to establish a pedestrian and bike crossing over the river that would connect to St. Paul’s paths.

On Thursday, an Extend the Greenway Campaign kickoff was held at the Anne Sullivan community school in Minneapolis, where organizers said that more than 30 local nonprofits and businesses have joined the effort to extend the Greenway over the river. The event was held to outline the goals and upcoming projects, and to launch a crowdfunding campaign to fund the effort. The campaign is being organized by the Midtown Greenway Coalition, the nonprofit that helped create the 5.5-mile path from a former railroad right of way.

The Oppidan project will be completed in phases. The Cub grocery store will open in the spring of next year, and the apartments will open that summer. Rents haven’t been set.