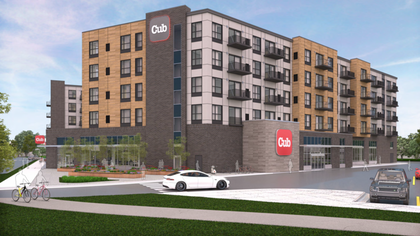 Supervalu Inc. (NYSE: SVU) has signed on to open a new small-format Cub Foods near Minnehaha Park in South Minneapolis.

"We're going to do things differently than we’ve done before at Cub," Dament said. "We’ll have things like multiple entrances, because there’s so many people walking by [that area], and we’re going to have a really beautiful outdoor area so you can sit outside. There will also be a window where you can order things outside."

The Cub store will have communal-seating areas inside with plug-ins, so customers can work on their computers or charge their phones. The store will feature a new coffee concept called Refresh! serving Caribou Coffee, ice cream and cookies.

"We want to design a store that, because it’s urban, customers will want to actually come inside and hang out for a while," Dament said. "We want to make it as comfortable as possible."

The store will offer fewer items than most other Cubs, but it will have a full grocery assortment with items tailored specifically for the urban community and apartment residents above it.

The store will feature some elements that Supervalu has mixed into its recently remodeled Cub stores: Grab-and-go meals under Supervalu's “Quick and Easy” brand, a juicery, an expanded deli with build-your-own food selections and a popcorn counter. It also will offer online delivery through Instacart and in-store pickup through its Click and Collect program.

The Capp will have 146 apartments above the Cub space, which is slated to provide over 130 underground parking stalls for tenants and another 170-plus stalls for customers. The development — in Minneapolis' Hiawatha neighborhood — is across Hiawatha Avenue from the 46th Street Blue Line light-rail station.

Oppidan has a track record of developing Cub Foods stores, including one that opened in 2015 in White Bear Lake.

The South Minneapolis urban-size store is Supervalu's first new Cub since it opened a Blaine South location in December 2016. The Eden Prairie-based grocery distributor and retailer had recently focused on revamping its Cub stores to better compete with newer entrants to the market like Hy-Vee Inc. and Fresh Thyme.

Dament said Supervalu hasn't signed any other deals — yet — for other smaller-format Cub stores.

"We’re going to test it and see how it goes. We’re 50 years strong with our heritage here," Dament said. "As our customers and communities evolve and there’s opportunities for our brand, we’ll consider it."

Pope Architects of St. Paul is the designer of the mixed-use Capp project. Oppidan's Drew Johnson is leading the project. Fitch Design is handling the interior architecture of the Cub store.

"The neighborhood does not have a full-serve grocery store to complement this residential growth," Johnson said in a statement. "When this project opens, over 15,000 people will be within a 10-minute walk of this store.”