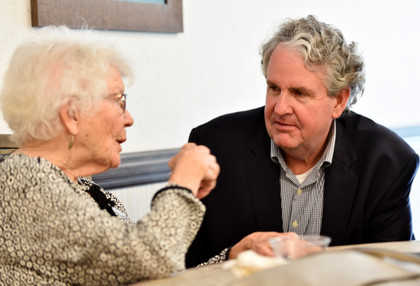 His sister is in the early stages of dementia and lives in a seniors community near Lake Minnetonka.

“She was as happy as she’s been in a few years,” Ryan said.

When Ryan’s mother was struggling with dementia a few decades ago, she didn’t have the daily access to stimulating events that his sister has. And Ryan felt like there were no solutions back then.

“We wanted the best-of-class for mom in terms of a community that she could be a part of … but we had a difficult time finding that level of care,” Ryan said. “I felt like I wasn’t able to help.”

It’s too late for Ryan to help his mother, who died several years ago, but it’s not too late for him to help hundreds of others in his mother’s honor, and that’s what he is dedicated to doing.

Ryan is CEO of Oppidan Investment Co., a national property-development firm based in the Twin Cities that has partnered with Ebenezer Management Services to improve care for people who have memory loss.

Oppidan has made donations of $100,000 to four facilities in the Twin Cities — Highlands of St. Paul, White Bear Heights Senior Living, Shorewood Landing in Shorewood and Red Rock in Woodbury — and will be donating to Pillars of Prospect Park and Pillars of Mankato.

Although the program has cost Oppidan more than half a million dollars, Ryan hasn’t hesitated.

“My mom and dad taught me to leave the world better than I found it,” Ryan said. “We’re very philanthropic in our approach and that’s inherent in the way we all think here at Oppidan.”

The goal of the donations is simple: Provide residents with experiences that make their days a little better.

“For those that are afflicted with dementia-related issues, it’s a very lonely place,” Ryan said. “We were hoping to make it a little less lonely.”

Those experiences include a variety of activities, often within the creative arts. Drum circles, interactive Shakespeare sessions, weaving and watercolor are just a few examples.

Once, residents painted with different colors of scented frosting. Another time, they learned to recite poetry. They regularly listen to and sing along with musical instruments.

“For me, I have never done anything as powerful as working with persons with dementia, assisting and encouraging them to be more present with their breath, their bodies, and with life,” Anna Vazquez, a music and movement instructor, wrote in an Ebenezer report.

The focus is on the interaction the activities stimulate.

“Dementia doesn’t matter when people are laughing and having a good time and just enjoying what they’re doing,” said Marysue Moses, Dimensions Memory Care coordinator at Ebenezer. “Unfortunately, with dementia, people don’t always have the initiative to start doing these things that will give them that sense of fun and enjoyment. That’s where we come in.”

Some residents participate enthusiastically. Others require more persuading — like June. (June and other residents’ last names were not disclosed for privacy reasons.)

The British woman was formerly an opera singer and had performed in the musical “Oklahoma” once, but she told memory care staff that she “really didn’t sing much anymore,” according to Moses. She often didn’t feel well and rarely attended memory-care sessions.

But one day, she decided to attend and was asked by the musician leading the session to sing one of the “Oklahoma” songs.

“It was so moving,” Moses said. “Her voice was so creaky and a little warbled, a little rusty at first. But when she hit the high notes at the end of it, her voice just soared across the room and you could hear the singer that she had been.”

Resident Clarence wasn’t immediately invested in the activities, either.

When he attended sessions, he rarely spoke, his head down and his eyes closed. But during a discussion about “Romeo and Juliet,” a leader asked the residents about love at first sight and finding love.

That’s when Clarence put his head up, opened his eyes and began to tell the story of the first time he saw his wife: “What a girl!” he said of her.

“This whole story of a lifelong love came out,” Moses said. “And from then on, he was a much more active participant,” even as his health deteriorated.

Then there was the quiet man with Parkinson’s disease who, during an exercise, roared like a lion so enthusiastically that he earned the nickname “King of the Forest.” And the woman who would spontaneously get up to dance while singing spiritual songs, saying, “Let yourself go!”

In the reports Ryan receives from the Ebenezer staff, he said, there’s at least one story a week of a resident who had a particularly moving experience during one of the activities. He keeps a framed watercolor landscape painting from a patient in his office.

If his mother were still alive?

“She might be doing the singing right along with my sister,” Ryan said. “She wasn’t a singer, but she was a wonderful woman. She’d have participated, that’s for sure.”