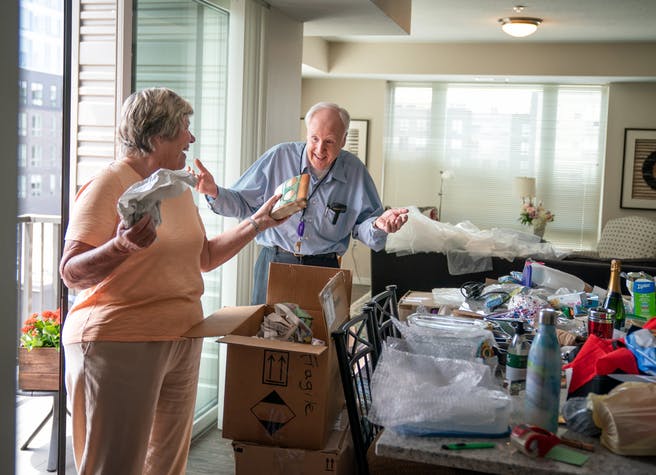 Both developers and the residents they serve have been forced to reassess their plans.

After more than 40 years in a big house, Janet and Fred Jacobs are getting settled in their new digs: a two-bedroom apartment at the Pillars of Prospect Park, a new seniors-only building in Minneapolis.

They have big windows, a balcony and a view of the Witch’s Hat water tower in a nearby park. A big move in the midst of COVID-19 has had its logistical challenges, but they will use social distancing as an excuse to focus on unpacking.

“We’ll be cautious as far as not doing community gatherings or social dining,” said Janet Jacobs.

Developers with senior housing projects in the pipeline in the Twin Cities are wary these days, as well. The vast majority of the COVID deaths in the area have happened in nursing homes and long-term care facilities, which represent a small and specialized subset of housing options for seniors today.

Still, companies that develop and manage senior housing in the Twin Cities say it has been tough to overcome the headlines and news stories showing bedridden seniors in isolation. Attracting residents is more difficult, they said, and some are putting new projects on hold. They are also rethinking how to design and build senior housing, which had been one of the fastest-growing sectors of the housing market.

“We still have a high-demand demographic that needs to be served,” said Joe Ryan, CEO of Oppidan, the company that developed the Pillars of Prospect Park. “But this has caused us to say ‘Let’s pause in some areas, and let’s understand the availability of capital.’ In a week’s time we have seen capital sources open up and encouraging us to move forward.”

Ryan said the situation has been fluid. While COVID deaths were accelerating during April, the fate of the company’s development pipeline was in limbo. By late May the company was seeing encouraging signs as capital sources started loosening.

Just-released census data show a double-digit growth rate in the senior population, but a dire lack of housing with the accessibility features they need. Still, an industry group said companies that operate seniors-only buildings had a more difficult time attracting residents last month.

The National Investment Center for Seniors Housing & Care (NIC) said the average occupancy rate in stabilized buildings — those that have been open at least two years, or if less than two years old at least 95% occupied — declined more than a full percentage point during April, the first full month of the pandemic in the U.S., after posting an increase during the fourth quarter of 2019. The occupancy rate in skilled-nursing care buildings fell twice as much to less than 85%.

Senior housing options run the gamut from fully independent living to those with round-the-clock nursing care, but most new projects today offer a variety of services that allow residents to “age in place” by moving from one level of care to the next as needed. Those that include dining areas, community rooms and other gathering spaces are often referred to as congregate-care facilities. Nursing homes and long-term care facilities, which are not restricted to seniors, have become a hotbed for COVID-19 cases because residents often share rooms and receive frequent visits from health care workers who move from room to room.

“This is a much larger issue than just the virus, but certainly the virus has exacerbated the issues,” she said.

She said turnover, which typically means aging up to another service level or having to move to long-term care, is still happening, but move-ins are declining or not happening at all in some buildings, she said.

Bujold said senior housing operators are also facing other COVID-related setbacks. While occupancy is softening, operating costs are rising as companies spend more to ensure that residents are safe. And labor — and the cost of payroll — is a major issue.

At Twin Cities-based Ebenezer, the largest senior living operator in the state and the 17th-biggest in the country, according to NIC, occupancy rates have fallen a couple of percentage points compared with last year, according to Susan Farr, Ebenezer’s vice president of business development.

“We have not seen a big uptick in move-outs compared to previous years,” she said. “We are experiencing slower lead traffic and lagging move-ins compared to this time in 2019.”

Some prospective residents, she said, are waiting until restrictions loosen up before moving in, so the company is shifting its marketing and sales efforts, including offering more virtual tours and “e-mails about how life continues to go on within our communities,” said Farr.

Twin Cities-based Roers Cos. has developed six senior living communities under its Havenwood brand, which are operated by Ebenezer and Walker Methodist, and had plans to develop several more. Amy Johnson, the company’s director of marketing and leasing, said new leads and applications were down about 15% and leasing is down about 20 to 25% from March to April. During May, she said, deposits rebounded as seniors began adapting to leasing via Zoom and new move-in protocols. Jeff Koch, principal partner and development leader for Roers Cos., said the company had been on the hunt for new locations in several Twin Cities suburbs, but isn’t pursuing those projects as aggressively.

“We’re slowing down and waiting out the market to see how this is going to shake out,” he said.

At United Properties, the largest commercial developer in the metro, sales of its for-sale senior buildings were still strong by mid May, according to the company. At its Applewood Pointe senior cooperative project in Eden Prairie, which offers completely independent living, more than 80 of the 102 units have sold and the building is still under construction. But in its five metro-area Cherrywood rental buildings, which include independent living, memory care and assisted living, the average occupancy rate has slipped from nearly 100% to 96.8%, said Ray Oborn, president of United’s Cherrywood Pointe Investment.

Mark Nelson, executive vice president of residential development for United, said the company had an “aggressive pipeline” of proposed senior projects, but some are on hold as the lenders take stock of the situation.

“We are just positioning ourselves to be ready for when we as a company want to move forward, or when capital markets will allow us to.”

Given the complexities of shopping for senior housing, many seniors have also put their plans on hold. Fred and Janet Jacobs, who are both in their 70s, said they are feeling fortunate to have gotten into the Pillars. They were interested in another senior building that is near the Green Line and the University of Minnesota, where Fred Jacobs was a professor, but it had a yearslong waiting list. And life circumstances, not COVID-19, dictated the timing of their move.

“We had made the decision that we couldn’t age in place,” she said. “And we’re still at a young enough age to meet new friends.”