Can't travel because of COVID-19 pandemic? These Bay Area seniors found a way to tour the world 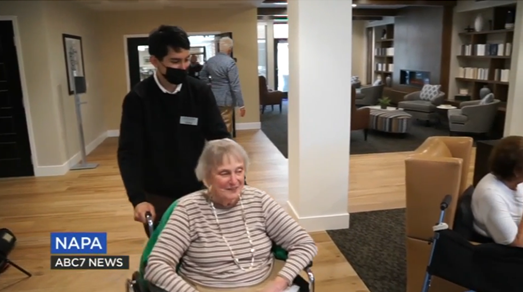 NAPA, Calif. (KGO) - When Frank Diaz was hired as at the Watermark in Napa, he expected a typical job doing tech support at a retirement community.

"I mainly thought it was going to be phone problems, connecting printers, setting up their TVs," recalled Diaz, who was hired during the pandemic.

The shutdown in the spring of 2020 was hard on seniors in retirement homes. Many were locked down for months and now, even with a vaccine, family visits are still limited and traveling can be difficult.

So Diaz was called up to set up Zoom or Facetime calls between the residents and family members.

Diaz said it was no different than when he helped his mother with her phone problems.

"It's just a different language that they never picked up on, like the share button. We know what that means and to them it is foreign, but they pick up things little by little," said Diaz.

While jumping from problem to problem, one day Frank noticed a pair of virtual reality googles that were stashed away in a drawer.

"They had a VR headset but they didn't have the proper personnel to get it started, so they let me play around with it," he explained.

It didn't take long before Diaz got it hooked up. Then he got an idea of using the virtual reality headset so residents could do the traveling that COVID-19 was preventing them from doing.

"With travel restrictions the way they were, people whose plan was to take a trip to Alaska or the Caribbean, they can go on the headset instead," said Kendal Buffington, membership associate for Watermark at Napa Valley.

Traveling virtually was fun, but soon something deeper began to unfold. The residents started to take Frank on a journey of their lives.

"The majority of residents have been requesting places they have been so they can relive memories," said Diaz, who enjoys watching them relive significant moments in their lives.

Watermark Resident Nadina Riggsbee, who was instrumental in getting a law passed to prevent accidental swimming pool deaths in California in 1996, asked to visit Lebanon.

"We had a tour of Lebanon which is where my father's side is from. You actually feel like you are right there, that's the exciting part," said Riggsbee.

Another resident asked to visit Yellowstone Park because that is where her family took trips every year.

"It sparks memories or start a conversation," said Buffington.

The trips down memory lane happen every Thursday.